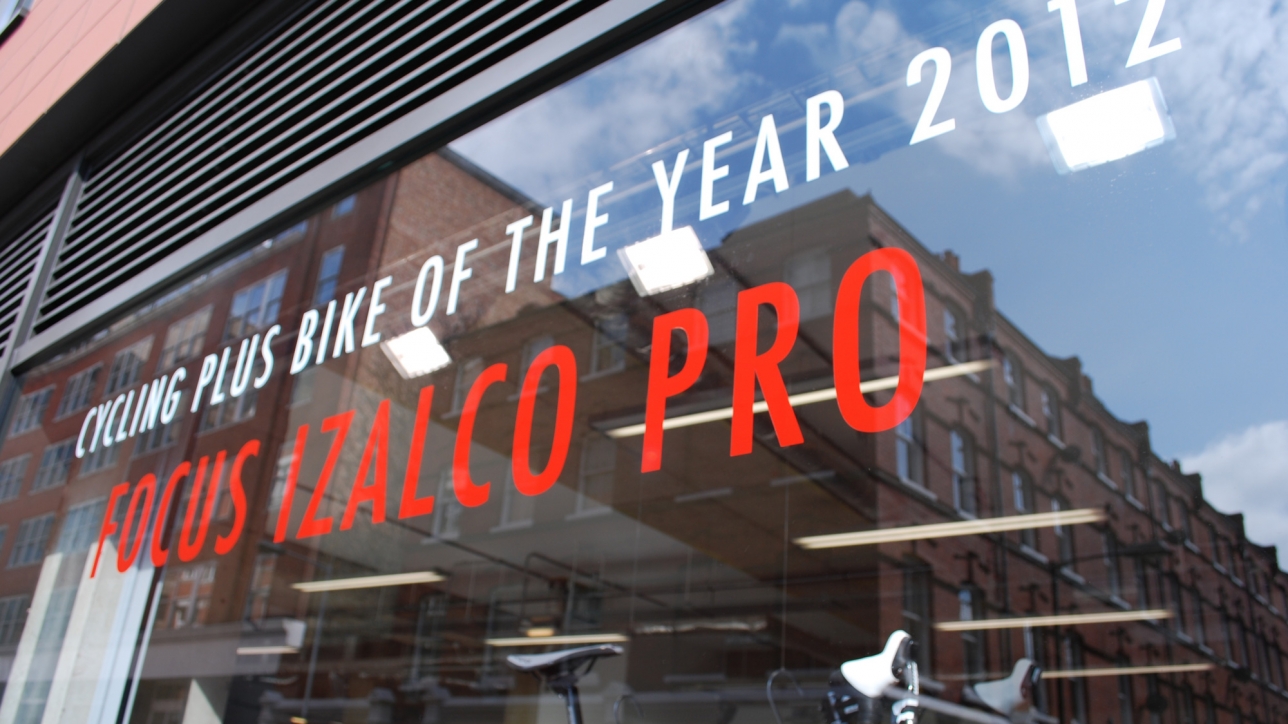 Window vinyl made by PJ’s Graphics to promote the cycling plus bike of the year 2012 at Swift Cycles in Spitalfields, London.

Cycling Plus’s Bike of the Year 2012, the Focus Izalco, has been around for a couple of seasons and has seen action at the highest levels of road racing, with the top-end Team model being ridden by Katusha and now Acqua & Sapone. Impressively, the Pro shares the same frame, with a weight that hits the magical 1kg mark and has all the features you’d expect of a pro-level chassis.

Up front a tapered head tube flows into a trapezoid shaped down tube. This has structural spines at the edges which cleverly double up as channels for the internal cable routing. The hugely oversized bottom bracket shell flows into beefy chainstays. The dropouts are full-carbon and angle backwards, meeting the super-skinny seatstays behind the rear axle. This additional length allows for more flex to aid comfort without affecting the stiffness of the chainstays.

The major difference between the Team and Pro framesets is the fork: the Pro’s equipped with a 3T Rigida while the Team gets a lighter 3T Funda. Brakes and gears are SRAM Force, the equivalent of Shimano’s Ultegra (as found on the lower spec Pro 4.0). Force is lighter than Ultegra and performs arguably just as well – it certainly has better brakes.

Rounding off the 3.0 package is a quality DT Swiss wheelset in the form of the RR 1850s. You can buy lighter for the same money but you’d be pushed to find anything put together significantly better. It’s good to see that Focus haven’t skimped on the tyres either: Continental Grand Prix offer reasonably low weight but a great feel, with plenty of comfort from the 24mm width.

On paper the Izalco certainly looks impressive, as it does on the scales too, at 7.78kg (17.2lb) for a 58cm size. But it’s the performance out on the road that counts and thankfully the Pro 3.0 doesn’t disappoint. With a compact drivetrain and wide cassette married to the bike’s overall lightness, the Izalco is truly exceptional for long hilly rides. That’s not to say that when you want to stomp on the pedals and thrash, it doesn’t follow suit – if anything the Pro 3.0 is at its best when you’re going as hard as you can.

The Izalco’s not just composed and rigid under power but it handles with a confident swiftness too. It’s absolutely among the very best around. Cannondale’s SuperSix Apex may have the edge in the handling stakes and the Trek 3.5 Madone sneaks it for comfort, while Canyon’s Ultimate offers unparalleled equipment, but the Izalco is quite simply the best jack of all trades. That’s why it’s our Bike of the Year.

This bike was tested as part of Cycling Plus magazine’s 2012 Bike Of The Year feature – read the full results in issue 260, on sale Friday 2 March.